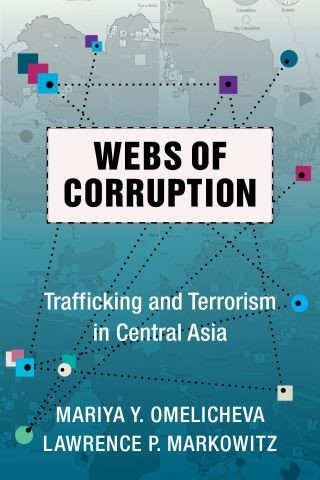 Trafficking and Terrorism in Central Asia

Counterterrorism experts and policy makers have warned of the peril posed by the links between violent extremism and organized crime, especially the relationship between drug trafficking and terrorism funding. Yet Central Asia, the site of extensive opium trafficking, sees low levels of terrorist violence. Webs of Corruption is an innovative study demonstrating that terrorist and criminal activity intersect more narrowly than is widely believed—and that the state plays the pivotal role in shaping those interconnections.

Mariya Y. Omelicheva and Lawrence P. Markowitz analyze the linkages between the drug trade and terrorism financing in Central Asia, finding that state security services shape the nexus of trafficking and terrorism. While organized crime and terrorism do intersect in parts of the region, profit-driven criminal organizations and politically motivated violent groups come together based on the nature of state involvement. Governments in high-trafficking regions are drawn into illicit economies and forge relationships with a range of nonstate violent actors, such as insurgents, erstwhile regime opponents, and transnational groups. Omelicheva and Markowitz contend that these relationships can mitigate terrorism—by redirecting these actors toward other forms of violence. Offering a groundbreaking combination of quantitative, qualitative, and geographic information systems methods to map trafficking/terrorism connections on the ground, Webs of Corruption provides a meticulously researched, counterintuitive perspective on a potent regional security problem.